Looking for a surprising holiday, both cultural and festive, luxurious and sunny? Choose Saint-Tropez! Saint-Tropez is certainly the most famous seaside resort on the French Riviera, and this is no coincidence… 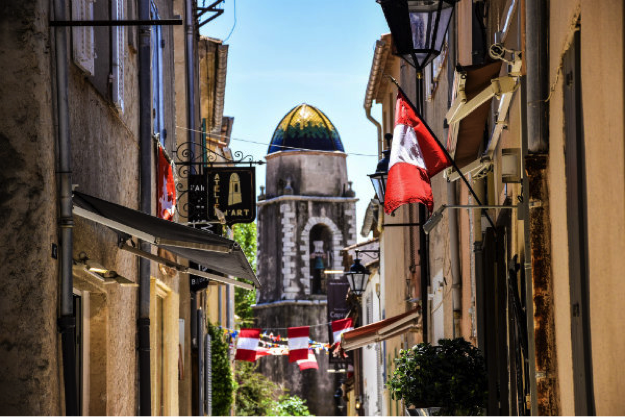 The city of Saint-Tropez is located in the Var department, on the Mediterranean coast of the Provence-Alpes-Côte d’French Riviera region. Even today, you can still see its Citadel, and its impressive keep surrounded by a moat. They overlook the old town and the bay.

At the beginning of the 20th century, Saint-Tropez forgot its past of privateers, it is a charming little fishing village. From the sixties, however, the city developed, to become, without losing any of its authentic Provencal charm, the unmissable meeting place for film stars (Brigitte Bardot, Luis de Funès…).

Only ten kilometres away from Sainte-Maxime, La Croix-Valmer, or Fréjus, Saint-Tropez is not much further away from Cavalaire-sur-Mer…or from Johnny Depp’s old house in Plan de la Tour! Saint-Tropez still retains an incomparable charm, and this is perhaps why it has a little more than 4,000 inhabitants in the winter, but much more in the summer…There are only good reasons to come to Saint-Tropez…

“Saint-Trop” is not only a picturesque and sunny stopover, it’s also a place where you like to have fun and dance until the end of the night! In the city and its surroundings, you are sure to be able to enjoy a trendy and prestigious evening, or several. Because Saint-Tropez loves champagne, and cultivates partying, elevated to the rank of local tradition.

In many top-of-the-range restaurants in the city centre, you can dance as much as you dine, with trendy Djs.

The Opera, located directly on the Port, is a must, with its exceptional view over the Bay of Saint-Tropez. It is closely followed by the Brasserie des Arts, Place de Lices, both a chic brasserie and, from midnight, a theatre of frenzied dances. The nightclub Les Caves du Roy, located in the Byblos Hotel near the same square, offers an electric and joyful setting for the best DJs of the moment.

Numerous clubs, very select and festive, such as the Nikki Beach, Route de l’Épi in Ramatuelle, to name only the most famous, open their doors all summer long, day and night, on the beaches of the bay of the Gulf of Saint-Tropez.

There is also the bank holiday of 14 July: in Saint-Tropez, it is particularly festive and sparkling, with grandiose fireworks fired from the sea, and the party goes on until the end of the night throughout the Port. The festivities of 15 August are not to be outdone, with fireworks, balls and concerts.

To enjoy an ideal climate

The climate in Saint-Tropez is warm and temperate. It is ideal for a sunny holiday without suffocating. The sea water averages 17.90°Celsius throughout the year. In August, it can rise to 24.40°C: it’s time for a swim!

For the rich cultural offer

The city has no less than four first-class museums. The Museum of Maritime History of Saint-Tropez is housed in the dungeon of the citadel.

The Museum of the Gendarmerie and Cinema is located on Place Blanqui. The Musée de l’Annonciade, on Place Georges Grammont, presents superb paintings belonging to the pictorial currents of Fauvism, Pointillism and the Nabis. The Maison des Papillons, and its superb collections, are located rue Etienne Berny, in the former house of the family Dany Lartigue, son of the famous photographer. The Lavoir Vasserot, rue Joseph Quaranta, a former meeting point for washerwomen, now classified as a historical monument, hosts exhibitions of contemporary artists throughout the year.

It is notably there that the “Happy Contemporary Art” Festival has been held for the last ten years or so, at the end of June. It has become an essential part of the contemporary art scene, with painters, sculptors, ceramists and photographers of the very first rank, determined to let us enjoy their brilliant, playful and joyful creations.

But that’s not all. Entertainment and cultural events in Saint-Tropez are numerous and varied. There is of course the “Do You Saint-Tropez” festival in June, a celebration of local music, but that’s not all! Music lovers can also enjoy the “Soirées de la citadelle”, in July, rich with a multitude of concerts of a very high standard. In August, classical music enthusiasts can enjoy a top-class programme in an exceptional setting, with the famous “Nuits du château de la Moutte”.

For water sports enthusiasts, the “Voiles de Saint-Tropez” take place every year at the end of September, with no less than 300 sailing boats competing. The races of the “Rolex Giraglia Cup” and the “Trophée Bailli de Suffren” take place in June, between Saint-Tropez and Genoa for the former and Saint-Tropez, Bonifacio and Malta for the latter. For lovers of beautiful mechanics, there is the spectacular “Euro festival Harley-Davidson”, which takes place in June. Every year, it attracts more than 10,000 enthusiasts and almost 2,000 motorbikes on parade.

The “International Polo Cup” takes place in July, with the parade of the Polo teams on horseback, in the old port, which closes the tournament. The “Porsche Paradise”, which takes place later in October, offers the opportunity to admire the most beautiful cars of the German brand on parade in the old harbour.

At the end of July, in the heart of summer, in Place des Lices, the chic boutiques of Saint-Tropez organise a real fashion show, the “Fashion Show”: dazzling, and so Saint-Trop! The town is not to be outdone in folklore, with the “Bravade Festival” in June and the festival of Saint Pierre, patron saint of fishermen.

To rent a luxury villa in a quiet area

If you want a luxurious holiday while listening to the cicadas singing, rent your house in Saint Tropez. Do not hesitate to contact John Taylor here: https://www.john-taylor.com/.

Saint-Tropez, the most chic of Provençal cities, offers an impressive choice of luxury villas and flats for rent: the assurance of an exceptionally preserved setting and impeccable services, from the spa to the swimming pool, for you to relax in. Here you will have everything you could dream of, to rest and enjoy dream beaches, mysterious creeks, picturesque visits and very select nightlife.

In Saint-Tropez, fine sand awaits you, over a distance of about ten kilometres… The beautiful natural beaches are numerous, from the beach of La Bouillabaise to that of La Moutte or Les Salins, via the beach of Les Graniers. Here you can enjoy lazing around, but also kite surfing, kayaking, paddle, water skiing, windsurfing or jet-skiing… There are numerous diving clubs all along the coast. Not far from Saint-Tropez, the beaches of the neighbouring towns are worth a visit, in Ramatuelle, l’Escalet or Pampelonne.

It is the reign of happiness, in the shade of parasols or umbrella pines. For a change and to taste new sensations, you can also take a trip to the Aqualand of Sainte-Maxime, with its waterfalls and dizzying slides. It is situated about fifteen kilometres north of Saint-Tropez, along the coast.

To discover the whole French Riviera

Saint-Tropez can be the starting point for many other discoveries. Sublime places to visit are nearby. For example, the beautiful flowery, perched village of Bormes-les-Mimosas is only 30 minutes away. It offers a breathtaking view of the islands of Porquerolles, Port-Cros and the Levant.

Not far away is the Fort de Brégançon, the official residence of the presidents of the French Republic. Don’t miss another beautiful Provencal village, Ramatuelle. It is teeming with art galleries. As for Grimaud, it is an authentic medieval village, with its beautiful cobbled streets. Finally, Port-Grimaud is a picturesque little port. Often compared to Venice, with its canals, bridges and shops, it has a charm all its own.

The bay of Saint-Tropez is one of the most beautiful in France. If you feel the soul of a sailor, and if you are not afraid to come across a few luxury yachts, it is the ideal place to treat yourself to a superb getaway at sea. Many different types of sea trips are available, and all of them offer delicious moments of relaxation.

These range from a simple excursion in the gulf, through a nice stopover in a cove, such as the Cavalaire creeks, to sunset walks and tastings. What beautiful memories are in store for you!

To stroll through the markets and cobbled streets

You should stroll through the old Saint-Tropez, and take the time to discover the local flavours in its markets. The one on the Place des Lices, sheltered by plane trees, is held on Tuesday and Saturday mornings. It smells of garlic, olives and fresh cheeses.

The fish market is open every morning until 1 p.m.: a profusion of red mullet, scorpion fish, sea bream, octopus and moray eels… Just next door, the picturesque Place aux Herbes offers fruit, vegetables, flowers, cheese and wine on its stalls. 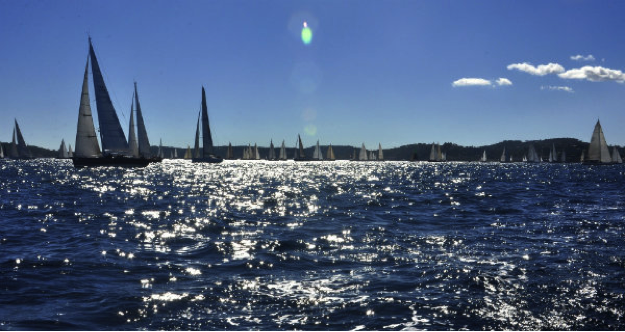 Saint-Tropez welcomes all international jetset during the summer season. This is the paradox of this charming, typically Provençal village: if you walk there during the summer, you are bound to come across millionaires and stars from all over the world. With such a public, it is not surprising to find in Saint-Tropez a beautiful collection of the most prominent luxury boutiques.

What more can I say? Hermès (Rue Georges Clemenceau) and Lancel (Quai Gabriel Péri) are not far away. To embellish the whole, a certain number, or rather a number of luxury jewellery shops offer their latest marvels to the eye, still in the town centre. There’s plenty to prepare for a walk of excellence!

To taste the gentle Provencal way of life and the superb beaches of the coast, Saint-Tropez in the summer is the ideal city. It promises you a stay that is at once authentic, top-of-the-range and festive. You will spend a truly delicious holiday in Saint-Tropez.